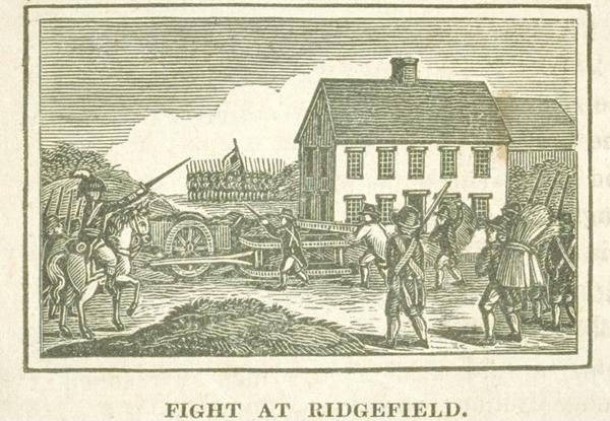 On April 25, a British force under the command of Major General William Tryon landed between Fairfield and Norwalk (in what is now Westport), and marched from there to Danbury where they destroyed Continental Army supplies after chasing off a small garrison of troops.

Major General David Wooster, Brigadier General Gold S. Silliman, and Brigadier General Benedict Arnold raised a combined force of roughly 700 Continental Army regular and irregular local militia forces to oppose the British, but could not reach Danbury in time to prevent the destruction of the supplies. Instead, they set out to harass the British on their return to the coast.

On April 27, the company led by Wooster twice attacked Tryon's rear guard during their march south. In the second encounter, Wooster was mortally wounded and died five days later. The main encounter then took place at Ridgefield, where several hundred militia under Arnold's command confronted the British and were driven away in a running battle down the town's main street, but not before inflicting casualties on the British. 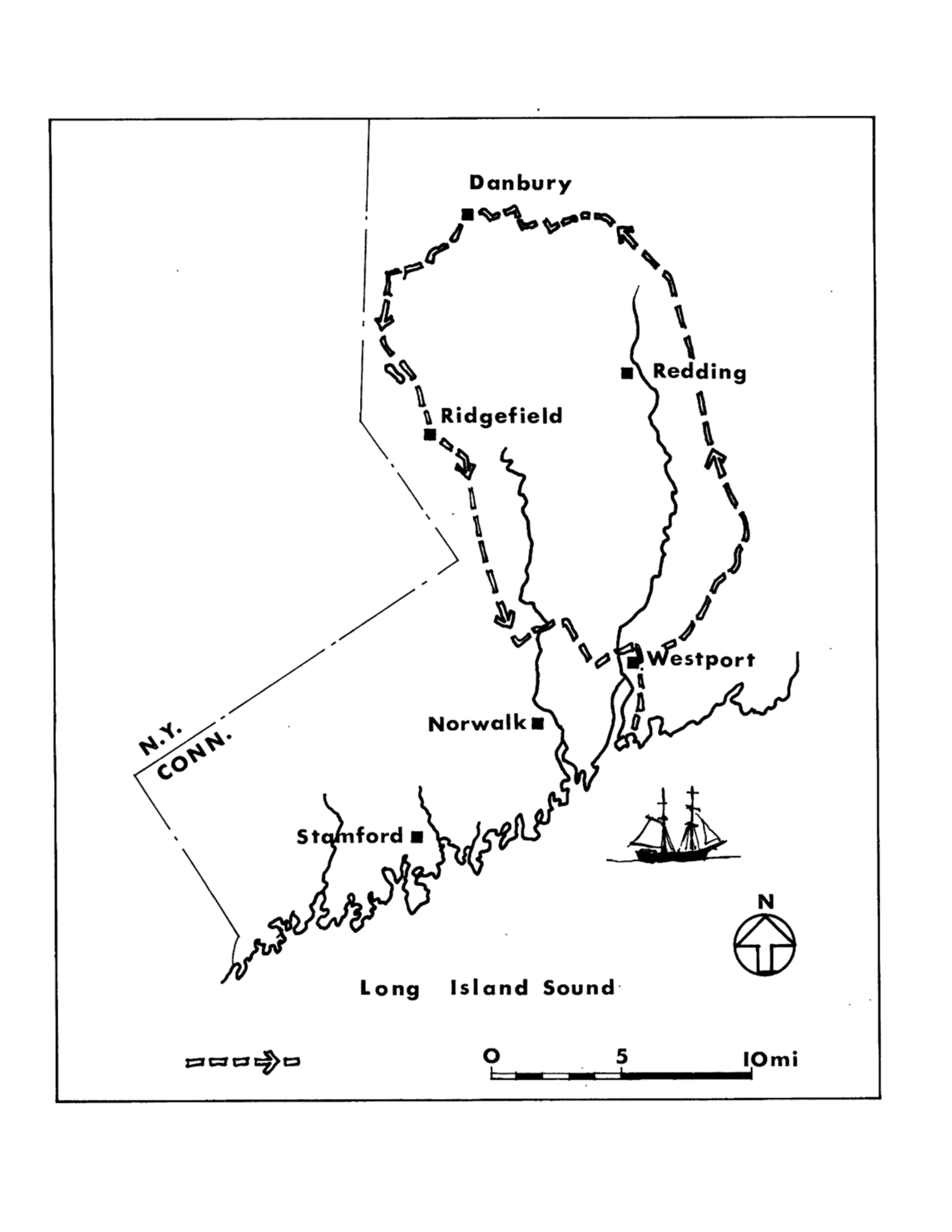 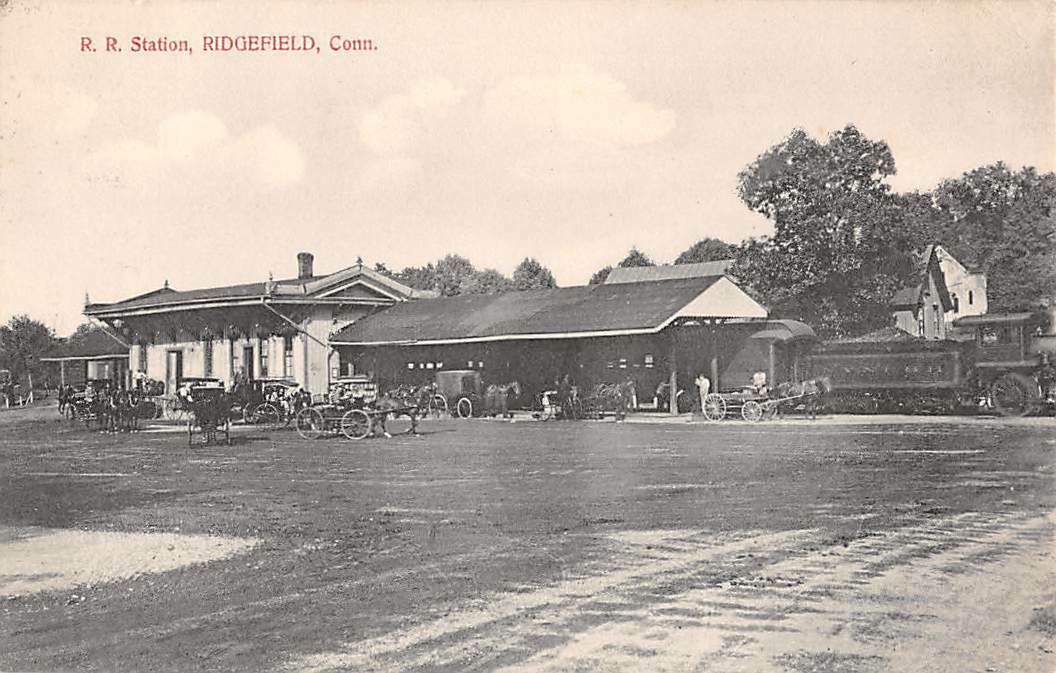 In 1870 the Ridgefield and New York Rail Road Company constructed a new branch line from Beers Station (Branchville) to the center of Ridgefield where Ridgefield Supply Company is located today. The first train arrived in Ridgefield on October 20, 1870. Building the four-mile line took a year and cost $250,000, as much as it cost 19 years earlier to build a track 23 miles from Norwalk to Danbury. There were two flag stops, one at Cooper Road and one at Florida Road. The last passenger train ran on August 8, 1925. Freight service continued until 1964.

On April 17, 1905, engineer William Horan left Ridgefield Station at 8:20 a.m. driving engine No. 1640. About one mile south of Ridgefield station the coal tender derailed from the tracks, causing the rest of the train to derail. The accident killed Horan. Thomas Dwyer, his fireman, escaped the same fate by being thrown from the cab against a stone wall 30 feet away. The reportedly "large number" of passengers traveling that morning suffered "slight bruises and flesh wounds'' but there were no serious injuries. 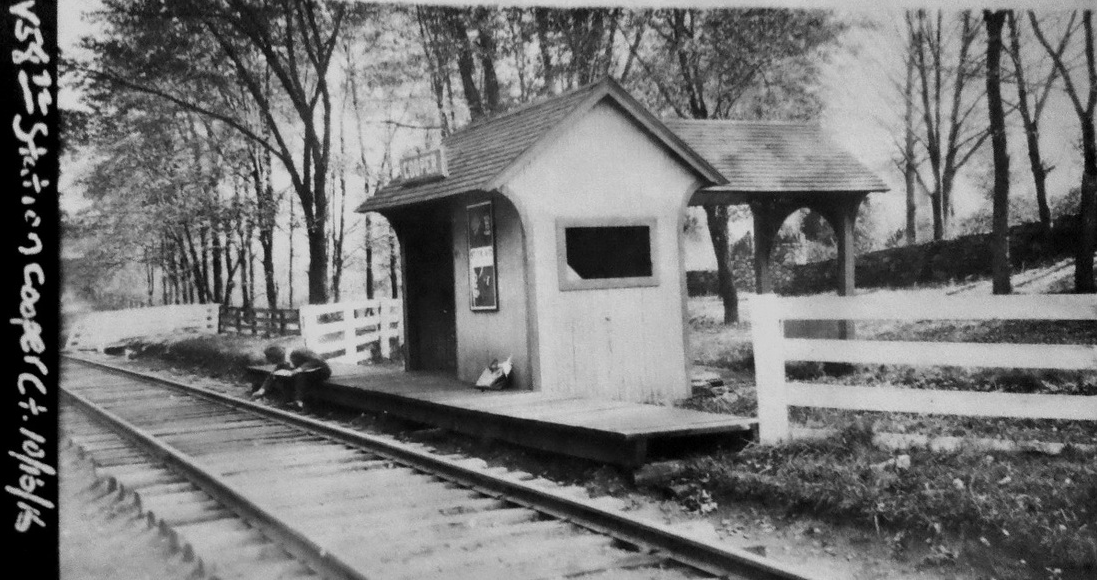 On the evening of December 8, 1895, a fire ignited somewhere in the Gage Building (which would later become Bedient’s Hardware and later Books on the Commons) on the northeast corner of Bailey Avenue and Main Street. Ridgefield did not have a fire department at this time. Witnesses tolled church bells to alert townspeople to the crisis. Dynamite was used on the Masonic Hall to create a fire break, but the fire was not stopped until residents tore down a portion of the Scott building to create another fire break which stopped the fire. 10 buildings which housed 13 businesses burned to the ground, creating losses over $100,000. Among the structures lost was the Town Hall, built in 1876. 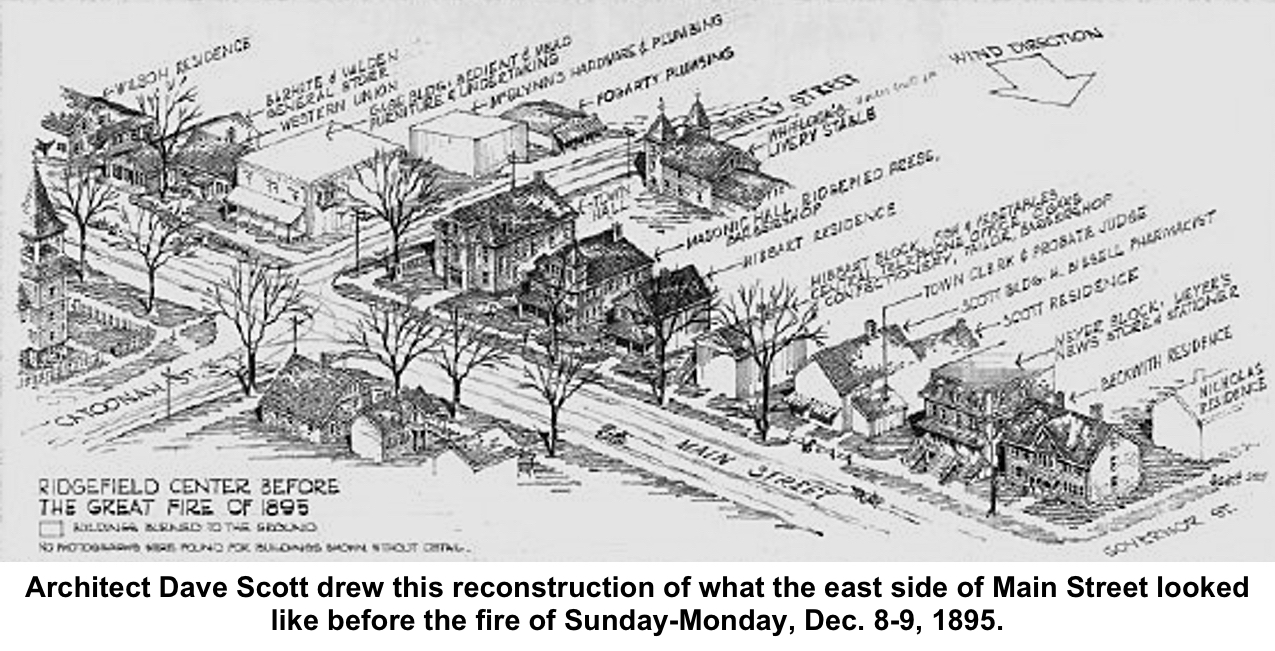 Disastrous Fire Prevails in the Town of Ridgefield, Conn.---Buildings in Rutherford Burning.

RIDGEFIELD, Conn., Dec 8.----The business district of this town is threatened with destruction by fire. The fire originated to-night in the big wooden block owned by G. S. Gage, situated on Main Street. The building was surrounded on all sides by other wooden structures and the flames found plenty of material upon which to feed.

Bediend & Mead were soon burned out and the Western Union office was also ruined. By 11 o'clock the flames had consumed the Gage Block and fifteen minutes later the fire attacked the Town Hall on the opposite side of Bailey Avenue. Adjacent to the Gage Block was a small frame building in which was situated the Western Union Telegraph office. Then came the grocery of Barhite & Valden and a few residences. These buildings were burned before 11 o'clock. 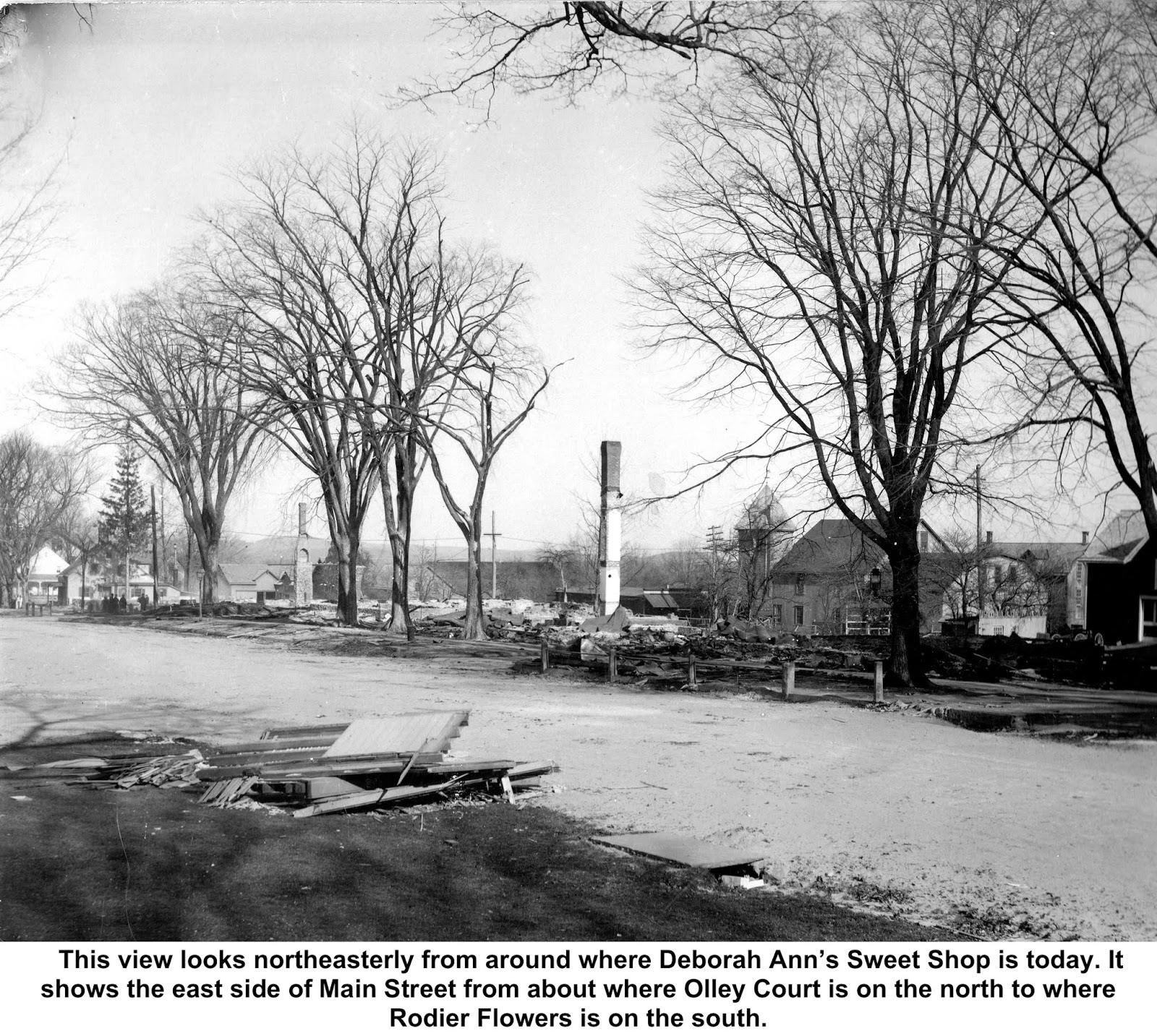 New Haven, Conn., Dec. 9.---Communication with Ridgefield has been cut off by the fire there. The Ridgefield Press building, it is thought, has been burned. Help was sent from Danbury.

Up to 12:30 Monday morning the fire had burned out the following business houses: Rutherford National Bank, in the McMain Building, in which the fire started; Bookstaver's real estate office, the Western Union Telegraph office, Vorwald & Prince's shoe store, T. Noden's stationery store, and a fruit kept by an Italian. The losses on these were as follows: National bank, $20,000; Vorwald & Prince, $4,000; Noden, $2,500; Eagle Shoe Store, $1,000; fruit store, $500. The upper floors of the McMain Building were used as flats. There were fifteen of them, and all were occupied by German families. All the tenants escaped from the building. Nothing was saved from any of the upper floors. The building was valued at $35,000. 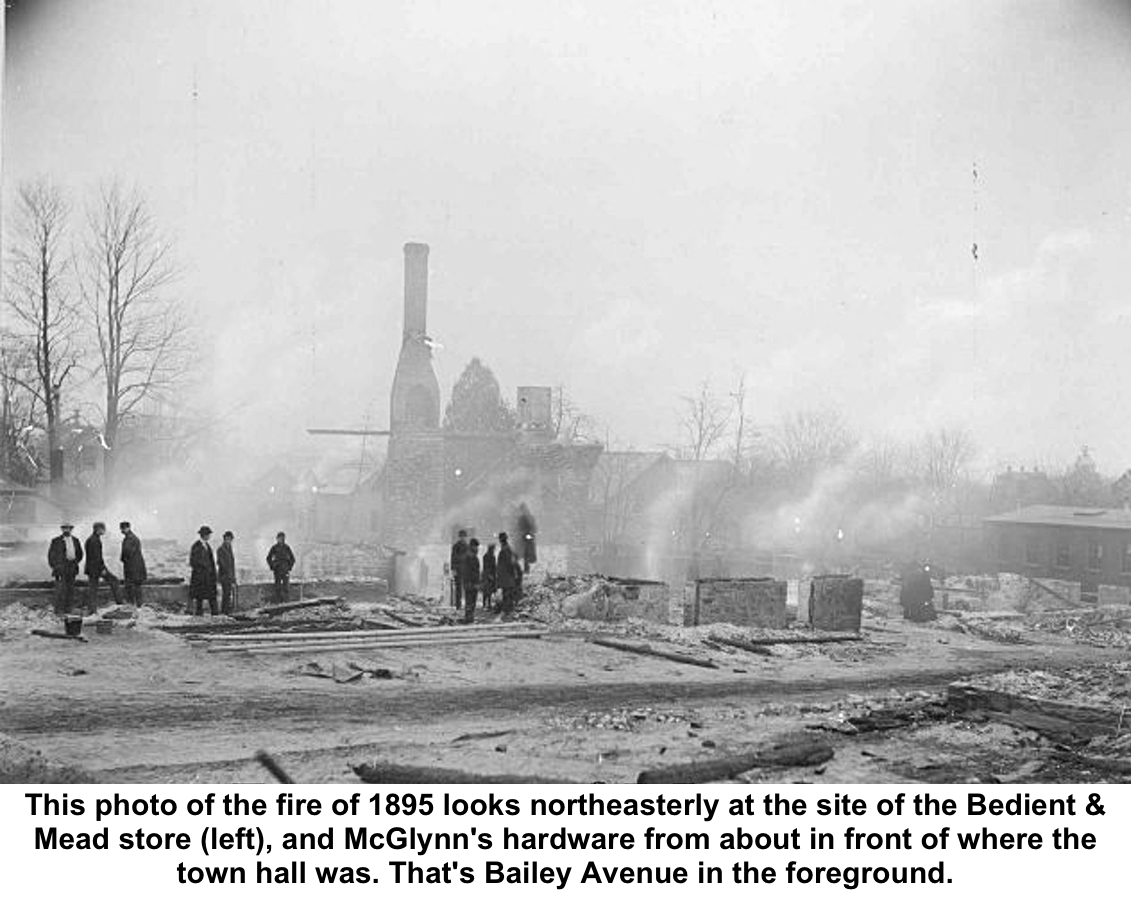 After the fire the town established the Ridgefield Fire Department in 1897. Phineas C. Lounsbury, a former state governor, donated a chemical engine truck and a hook-and-ladder truck custom built for town by the Gleason & Bailey Manufacturing Company of New York. Either truck could be drawn by hand or horses. The town fire station was located in the basement of the new Town Hall. The outline of the original arched equipment bays can still be seen in the lower level of town hall along Bailey Avenue.A metal, wheel-shaped gong was hung at the rear of Town Hall where it could be struck with a sledge hammer to summon the volunteer firefighters. It remains there today. The new Department was divided into two “companies.” The Phineas C. Lounsbury Engine Company with 36 charter members, was headed by James W. Fogarty, foreman. The Caudatowa Hook and Ladder Company with 39 charter members was headed by George Abbott, foreman.